You are here: Home / Conferences / 140Conf NOW Award Voting – What Does It Mean?

I have been sprucing up my votes with comments about each person. It certainly makes for a more valuable tweets. I’ve gotten some votes and I must admit, it feels good to get votes. Congratulations to the leaders. 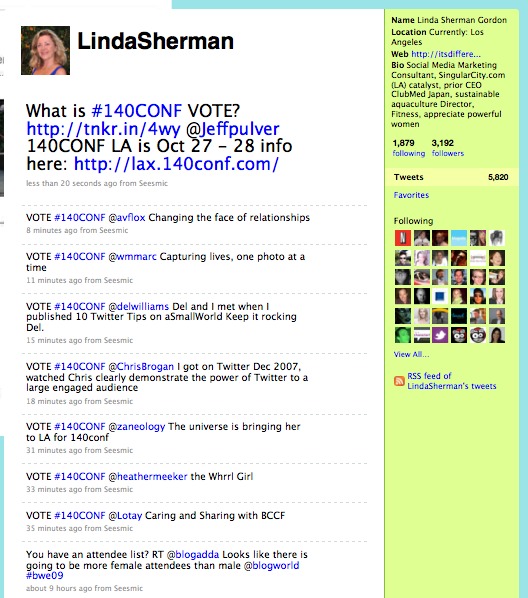 This kind of competition reminds me of a blogging contest I was in. I titled the results: The Thrill of Competition and Trying Harder. Is it about merit or rallying for votes? How many people know about or understand what it is for?

I have found the following links. If something more has been written about the awards, please let me know:

I gave some feedback as requested in the email below:
NOW Awards: if there was a bit more on this page: lax.140conf.com/now-awards
you might be able to start a trend (at least for some voters) to include a link which takes them to the #140conf website instead of a separate voting page that doesn’t include info about the conference. This page should of course link to the Tinker page which should in turn link back to lax.140conf.com

Jeff Pulver asked me to outline the motivation behind the NOW Award.

140Conf NOW Award arose as an experiment in tracking Twittersphere merit and to supplement follower count as the measure of merit status quo. The relatively mild endorsement reflected in following someone leads to the quality versus quanity dispute.

The NOW Award nomination process offers a mechanism for strong endorsement, because the nomination happens after the fact of following and requires the proactive nomination step (#140Conf vote @ nominee). As a result, the NOW Award creates a “best of” followers dynamic.

Multiple means for assessing merit make sense in a context like Twitter where the number of options make trial and error navigation impossible. The growing volume people active on Twitter meant a NOW Award along the lines of the People’s Choice Award rather than Zagat’s expert opinion route.  The NOW Award team did not even attempt to shrink the pool of candidates via filtering phase as in the case of The America Idol. Anyone can nominate anyone for a NOW Award.

There have already been some surprising results as nominations seem as likely to arise for ordinary people with an active follower base as celebs with millions of followers.  The NOW Award team will identify trends in order to designate ten categories in which a NOW Award will get presented at the 140 Characters Conference first night reception on October 27, 2009 at the Kodak Theatre in LA.

In context of refining 140Conf NOW Award experiment, please participate by nominating your favorites and forward comments or suggestions for improvement.