This is the first time that a Hawaiian Cardinal has visited my table on Kauai. I find them endearing so I let him stay and pulled out my iPhone 5s to video him.

Apparently Red-crested Cardinals were introduced to Kauai from South America in the 1930’s. The bird is sometimes referred to as a Brazilian Cardinal.

Red-crested Cardinals usually eat seeds, bugs and fruit. In the video you will see that an egg yolk is sitting next to a piece of high fiber toast with peanut butter. Being a bird, I expected him to go for the bread. But I ended up with 5 videos of him coming back for more egg yolk.

It is unusual to hear the background noise you hear here. It is generally very serene on Kauai. Just a chance bad timing with some very happy kids at a near-by pool.

The pretty blue bottle is Protandim. I take one with breakfast.

The second video is the last video. He is getting a bit skittish because tables near me are being cleared. 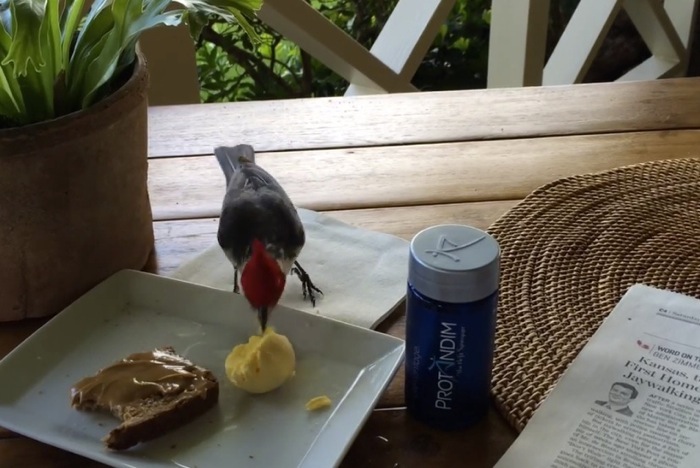 Update: Several people said “cannibalistic!” but an acquaintance of mine who raises chickens on Kauai says that she feeds them scrambled eggs and they love it.