Kenichi Ebina choreographs and performs a very unique style of dance that demands strength and creativity. It could be called performance art. He has described it as “dancish”. Some point to the martial arts aspects, story telling and mime. He often works with multiple versions of himself using screens, requiring special tech production and coordination. 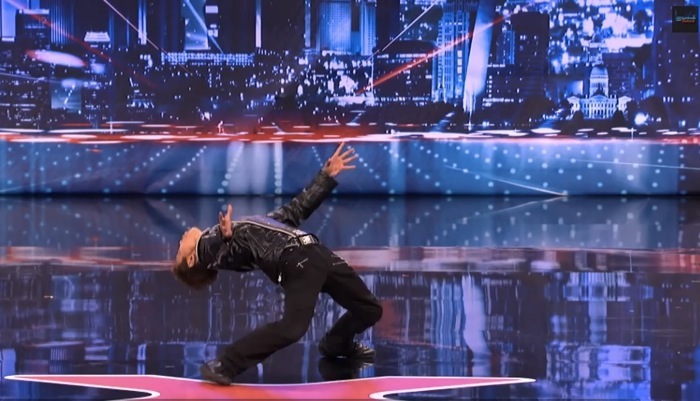 I first saw it thanks to Adrynn Ashley’s sharing on Facebook from 97.5 radio station’s Facebook Page.
Many people were strongly struck by this video displaying Ebina’s extraordinary telent. Ray Gordon and I got very interested and went to look at more of Kenichi Ebina’s work around the internet. I wanted to share it with you here, bringing you the highest quality clips we found. His performance on America’s Got Talent are from their official YouTube channel.

You can learn a bit more about Kenichi Ebina on his Wikipedia and his EbinaPerformingArts.com website

Ebina’s performance when he was in the top 12 on America’s Got Talent was a departure in style dramatizing love, death and after-life.

Ebina’s final performance reviewed by NBC’s Today. Each of the 5 finalists did a do-over of an earlier performance. Kenichi did his robot remix.

March 2007, Kenichi Ebina appeared at the TED conference. This is his performance at TED.

Kenichi Ebina is Japanese. He was born in 1974.

Updates:
I posted this on Facebook and learned more about Kenichi Ebina from my Japanese friends.
I was told that the Japanese have learned about Kenichi Ebina (it appears they refer to him as “Kenichi”) recently. He is an inspiration to young people for working hard and perseverance.

Over the next three years, Kenichi plans to organize a show in Japan and take it abroad. This will require financing (I am looking forward to learning more about this). But he does have the $1,000,000 prize from America’s Got Talent.

The following video posted in March 2014 with Kenichi talking about his future plans is in Japanese.

There was some controversy about a Japanese person winning America’s Got Talent. “TeamKenichi” commented this on HollywoodLife.com:
The debate about his nationality drags for too long and a lot of people misunderstand. Look, he came to the States at the age of 19 years old, and he studied at University of Bridgeport, and then spent pretty much majority of his life in the States, dancing in New York, in the beginning he danced a lot for the Jewish coming age party. He himself told it during an interview (you can search at Youtube). He has also taught dancing in U.S, and he just started dancing in Japan in 2012, and so not many Japanese know him. He said Americans know him more (in the dancing circle, just do research on him), and he felt most at home when dancing in New York. To stay in the U.S. for so long, he must either be a permanent resident or a dual Japanese / American citizen. NBA’s rule is if anyone wants to apply, they must be either PR / U.S. citizen. The fact he can even enter the competition proves he already fulfills the criteria, or else NBC wouldn’t allow him.