You are here: Home / Social Marketing / New Facebook Groups – How to Protect Yourself

Facebook made some new announcements this week. As usual, it is important to note what they have done and redo the settings on your personal account. The most noticeable change is the change in Facebook Groups.

There were some positive intentions with this change, however, the current platform allows new activities that most definitely impact your experience on Facebook.

A woman that I am friends with on Facebook created a new Facebook group, with a title suggesting that the members are elite in some way, and added me to the group along with 160+ other people.

This in itself has some issues. Do we all agree with the curation of the members? I founded a group called Women on Top while I was CEO of Club Med in Japan. We let all members participate in the process of vetting members. Complex process but we definitely built a kick-ass group.

So what happens when you get added to a Facebook Group? Every time someone comments on the group, everyone in the group gets an email notification. I am including my email inbox today as an example to show you what happens in default mode.

Much of the commentary on the group on the first day was chatter about archiving all these emails. Perhaps there should be a setting choice for an email digest instead of individual ones? Personally, I don’t need to be notified at all. If I want to see people’s comments I can go to the group. The last thing I need is more stuff in my inbox right now. Yes, I can take these mails directly to a smart inbox folder – but do I need these mails on my computer? That is certainly up to you. If you think they are important and you want to look at them later at your leisure, you should archive them. 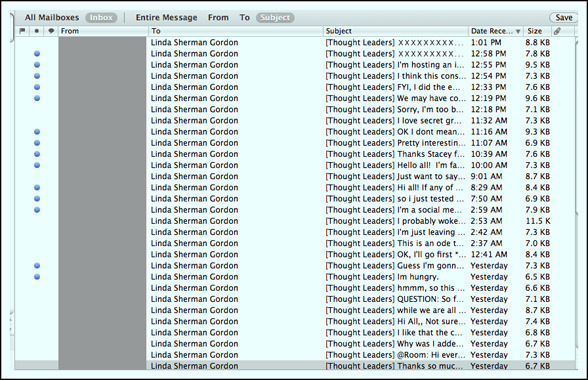 The screen shot of my personal email inbox has been sanitized to remove the names of the participants following receipt of the complaints you see in comments here. I apologize – I didn’t see anything sensitive in the screenshot. The first 2 – 3 words of comments are completely innocuous. But just FYI – The lack of an opt-in on Facebook Groups also lacks any agreement on the part of members to keep a private group private. Do read the SearchEngineLand article linked to at the end of my post for further shenanigans encouraged by this move on Facebook.

The first time I encountered this type of thing was on Whrrl when they initiated the ability for Members to create “Societies” and add their friends to them at will. After being added to a “Society”, the society began sending notification alerts to my iPhone as though it were one of the few notifications I actually wanted to get – each notification making a ding on my battery. Fortunately, Whrrl swiftly responded by clarifying we turn off that notification.

Same with the new Facebook Groups. I didn’t ask to be added nor to get email notifications, here they are but it looks like they can be turned off. AND you can reject the invitation by removing yourself.

I already have Facebook Chat turned off but apparently you will be buzzed by your Facebook chat.

If you are added to a group, you DO have some choices.
Choice 1: Remove yourself from the Group:
Click on “Leave Group” as in picture below 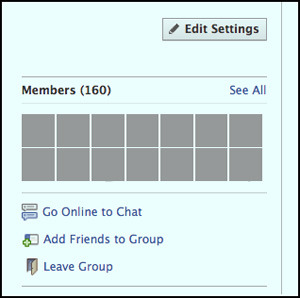 The head shots of 14 members were removed from this screen shot.

Choice 2: Limit Notifications.
There are several places to do this.
Click on Edit Settings: this is the first screen. The default is “Notify me when a member posts”You can change that. 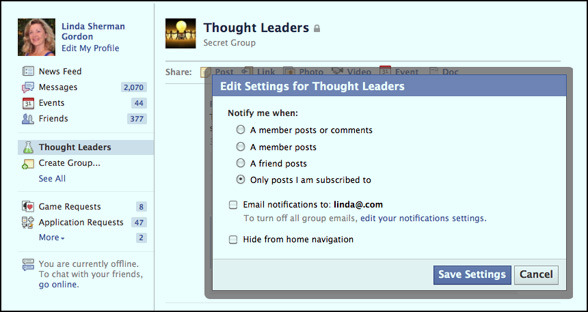 This screen shot was photo-shopped to remove a member’s comment.

Secondly you can choose these notifications – but you should want these.

You’ll see at the bottom of this group “change email settings for individual groups”
By default the group is clicked. You can unclick this:

Meetup.com can sometimes do short spews of correspondence but nothing like what has been created by this group. And I joined MeetUp by my own choice. As things settle down a bit and the ramifications of this move on Facebook become more clear, I will publish an article for my readers at Boomer Tech Talk.

Additions:
Found this great article Mari Smith posted on her Facebook by Danny Sullivan at SearchEngineLand. Danny does an excellent job making the point that Facebook Groups should be opt-in, not opt-out. Reading it, I felt glad that I’ve been selective in adding Facebook friends – but I still want opt-in.