Peter Shankman does not need defending. I am just one of a multitude of fans. His announcement on Facebook today “And in other news, I just got my fourth book contract” got 670 likes in the first five hours.

But I was moved to respond to an article in BostInno today titled Dear “Baby Boomers, Millennials Don’t Suck” that mis-represents Peter’s advice because he never implied ‘millennials suck’. He gave cogent advice that is worth taking note of.

First let me reveal my bias. I am a fan of Peter Shankman‘s. If you’ve ever seen him make a presentation (I’ve seen several of his), you know that he is brilliant and generously delivers valuable advice for everyone. I watched the Fox Business Street Smarts TV show video you reference with host Melissa Francis, corporate coach Rachel Dealto, Sumpto founder Ben Kosinski (representing millennials) and Peter Shankman.

I have to agree with Peter, Melissa and Rachel who all disagreed with Ben. Though dressing for an interview was discussed, the most important point of departure for me was Ben saying that millennials should not have to do free internships even though 80% of recruiters want to see that on a resume. Melissa mentioned that she worked a part time job so that she could save up money to carry her through a free internship because she knew it was required. The answer is not that companies should pay for internships.

You’ve intertwined an article about boomers and the video with Peter and ended up with a link bait title of boomers vs millennials. Let’s be clear that the Fox Business show Peter was on had nothing to do with boomers – and no one on that TV segment, including Peter, is a boomer.

If you are a millennial, I think you could benefit from watching the video linked above.
If you want to land a job, refining your Personal Brand will definitely help you.

My reference to boomers is given with a background of research into the baby boomer generation for my website BoomerTechTalk.com

The most annoying thing here is that the comments (via the direction of the article) have mostly centered around clothing. That’s SO not the point. (Lengthy comment coming up. Apologies in advance.)

The point is this – I don’t care what you wear to the office, and I don’t really care how/where you get your work done, so long as I can trust you to in fact, get it done. Coming out of college means this: You’re just starting out, and to get huge, you need to do two things: You need to earn the trust of whomever hires you, and you need to pay a price to do so. If you base the experience you’ll have right out of school on what happened to Zuckerberg, you’ll be in for a rude awakening.

I went to High School of Performing Arts – We were all “awesome” actors/musicians/artists in our respective Junior High Schools, all the stars of our middle schools. When we got to LaGuardia HS, the first thing were told was a massive smack-down: That we probably wouldn’t make it as a successful actor/musician/artist, and while we should definitely continue to hone our craft because we had enough talent to get into the school, we more than likely weren’t going to become the next breakout megastar. And that was PRICELESS advice. With the exception of Marlon Wayans and Omar Epps, my high school graduating class of 1990 went on to college, and all live their lives in tons of different professions – But we all had to pay our dues – in unpaid college internships (I worked midnight-8am as a security guard to make money so I could take an unpaid photojournalism internship), in first jobs that paid shit, where we got coffee and filed papers as we leaned the ropes… So we could move up. Some people stay on that path and achieve happiness within the corporate world, while others, like me, take the risk and go out on their own, with the foundation of what those years of dues-paying taught us. It’s nothing new – it’s a system that’s been in place for hundreds of years. And it works because of one simple fact: When you get out of college, no matter your GPA, no matter how brilliant you think you are, YOU DON’T KNOW EVERY FREAKING THING YET.

Want to launch a startup, go public, and make billions right out of college? GO FOR IT!! That’s the power of the dream, and I’ll wholeheartedly support anyone who takes the risk. The problem I have is when that person assumes that it should just “happen,” because they saw Zuck or whomever do it. That’s like the mediocre HS basketball player expecting to be drafted as a sophomore because ONE PERSON in a MILLION did it. And THAT was the story on FOX – That a study showed that today’s college graduates are lacking in the fundamentals, including the fundamental of humility, a must if you’re ever going to succeed in anything you attempt.

At the end of the day, no matter what path you take, the key to success is working hard, volunteering to do the shit jobs no one else wants, and an understanding that success tends to come most easily to those who bust their ass to get it.

Insofar as what you wear? Well, I had a boss back in the beginning of my career, Lou Lamoriello, who told me that I should always dress like I’ll happen to meet the most important person in the world that day. While I rarely wear a suit now, you can bet your ass that when I’m meeting someone important, someone more established, who’s been gracious enough to take time out of their day to grant me a few minutes? Well, I’m going to pay them respect by caring enough to present myself well. Even if the first thing out of their mouth is “Take off that fucking tie!” (Which has happened,) I’ve simply NEVER gone wrong by dressing up – It implies respect. And that’s sorely lacking in this world today – from the world as a whole. Not just millennials. From everyone. And if 30 people apply for a job, and you’re the only one who takes the time to respect the position, well, you’ll get the job because you positively stood out. It’s about first impressions and presentation. Why wouldn’t you want to stand out?

Sorry for the length of this comment, but I wanted to clear up any misconceptions. Ironically, I happen to think Ben is on to something with his startup, and I mentioned that twice during the FOX piece. A fact conveniently left out of your article.

I was serious about reaching out to me when you’re next in NYC, Smit. I look forward to it.

PS: FYI, Boston connection: I’m a proud Boston University Graduate, who wore a tie on his graduation day. What happened? I wound up spending ten random minutes one-on-one with our commencement speaker, Ross Perot, who gave me a card and told me to call him if I ever wanted a job. That tie is now my lucky tie. I still have it. 🙂 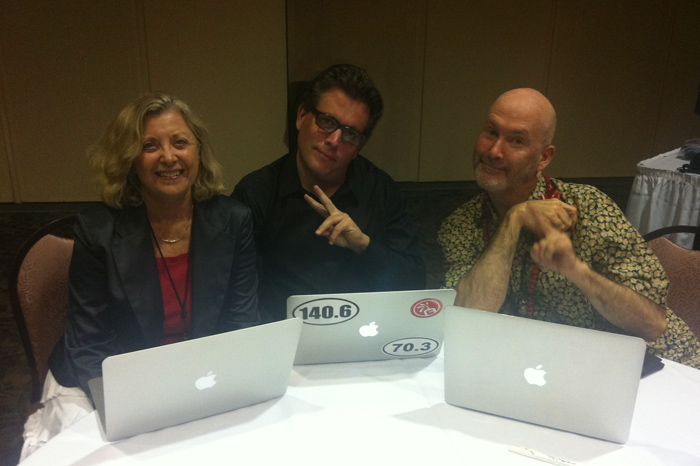 Couldn’t resist getting a shot of the three MacBook airs in a row at our table at Hawaii Social Media Summit, following Peter’s keynote. You can tell Peter Shankman and Ric Dragon think I’m being a techno-dork.